The Brotherhood of David and Jonathan or the Order of the Secret Monitor’s ceremonies as with many factors in Freemasonry typically surround a story or legend and this order is based upon the remarkable friendship which existed between David and Jonathan as can be found in the Bible – Samuel XX.

There are three distinct degrees to the Order of the Secret Monitor:

SECRET MONITOR – FIRST DEGREE
During the Induction Ceremony the story unfolds recalling the Friendship that developed between David and Jonathan and the wonderful lessons to be learnt in friendship, support and fidelity.

PRINCE – SECOND DEGREE
Admission into an Assembly of Princes is also derived from the Book of Samuel and recalls how Saul sought to destroy David and relates the interesting legend of the methods contrived to foil the pursuits of the jealous King.

SUPREME RULER – THIRD DEGREE
This last degree concerns the Installation to the headship of a Conclave and surrounds David’s Kingship. Within the ritual of this degree there is a ceremony of Commissioning, which permits rank and status throughout the Order as a whole and furthermore, a certificate is issued to confirm the Officer is Commissioned, both of which are quite unique in Freemasonry. 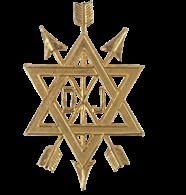